American Landscapes investigates the fraught politics of LGBTQ rights in America.  A commentary on the struggles towards the legalization of gay marriage, this series is informed by my personal trauma as a closeted gay man rejected by my family once I came out.

Incorporating images such as the American flag, Human Rights Campaign logos, blue-jeans, and pairs of same-sex paper dolls, I use a palette dominated by shades of orange and red to reflect upon my personal journey as gay Syrian-American. 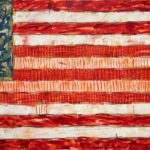 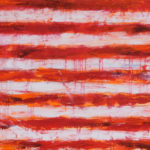 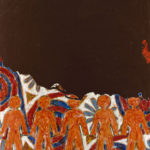 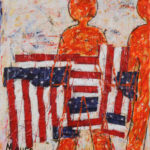 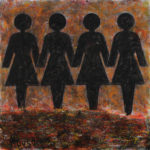 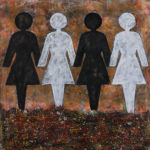 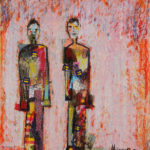 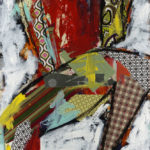 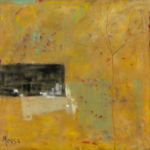 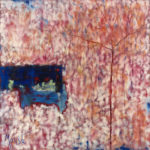 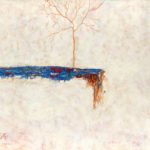 American Landscapes: An Exploration of Art and Humanity

Using orange as a color representative of fear, Mousa’s mixed-media American Landscape Series takes up the fraught politics of LGBTQ rights in America. He employs the color’s long association with post-9/11 security threats – Code Orange (emergency code), even though in Europe and America prior to 9/11, orange had very positive connotations, like warmth, sweetness, and high energy. In Buddhism, orange is the color of illumination, indicating strength and wisdom. Mousa, however, uses it to add a disquieting sense of alarm to his work. Applied with scratchy, frantic marks, the color connotes both fire and blood. It lends urgency to an issue that’s intensely personal for Mousa, a gay man subject to right-wing, pro-family ideologies that compromise the queer community’s civil rights. The panels feature same sex figures linking hands – in pairs, rows, and even formations that build up the stars and stripes of the American flag. Combining them with other potent signifiers of American culture, the series provides important commentary on civil rights in the United States.